Our Fallen Officers
Jonathan De Guzman (affectionately known as JD) was born in the Philippines on September 17, 1972.  He and his family moved to the United States when was a young man in search of the American dream.
On October 2000, he made a big step towards fulfilling that dream.  He joined the San Diego Police Department as part of the 48th Academy.  After graduation, he worked as a patrol officer in the Mid-City Division.  This is one of the busiest and most diverse divisions in San Diego.  While serving that community, JD was stabbed by a suspect during a traffic stop.  He was awarded a Purple Heart for sustaining a life-threatening injury while on-duty.
In 2010, he joined the Gang Suppression Team (GST) as part of his duties.  GST is tasked with trying to stop gang violence and all other gang-related crimes such as homicides, narcotics, assaults, etc.   JD also fulfilled a career goal by becoming a member of the SWAT team.  He showed his persistence and determination after not making the team the first time he tried out.
During his duties as a GST officer, JD was involved in the investigation of a suspect who had been building improvised explosive devices (IEDs) and had set off bombs throughout San Diego.  While trying to arrest the suspect, JD and the rest of his team were involved in a shoot-out with the suspect.  The suspect was armed with a rifle, handgun and several bombs.  For their dedication to duty and heroism, JD and GST were awarded the Meritorious Service medal.
JD, ever the humble person he is, hardly wore the medals he deserved.  Instead, he proudly wore an American flag on his uniform.  When asked why he doesn’t wear his medals, JD said he didn’t want to stand out.
On August 28, 2016, JD and his partner Wade Irwin were patrolling the southeast area of San Diego.  While trying to conduct a pedestrian stop, they were met with gunfire.  Officer Irwin sustained injuries to his neck.  He is expected to recover.  JD was hit on the torso just a few inches above his bulletproof vest.  He passed away from his injuries.
JD is survived by his parents, his wife, Jane and two children, Jonathan Jr. and Amira.  JD was very much involved in his community.  He was a Sergeant at Arms with FALEO-San Diego Chapter.  JD will be missed and will forever be in our hearts. 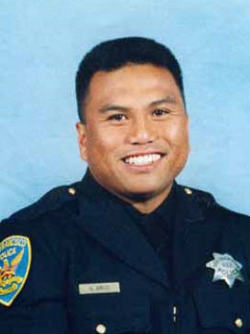 Nick-Tomasito Birco
San Francisco Police Department
Officer Birco was killed on Wednesday, July 26 after a stolen van, collided with the officer’s patrol car at Cambridge and Felton streets. In this incident, police had received a call from the victim of a robbery who had just gotten off work on the 500 block of Bayshore Boulevard. The victim accompanied the responding officers in a search of the area to look for the suspects and vehicle. Officers located the suspect vehicle and observed that the license plate matched that of a robbery vehicle that had been broadcast earlier. As officers approached, the suspect drove off.

Officers initiated a pursuit, which continued onto Highway 280 to South San Francisco, then proceeded back to San Francisco. At about 1:00 A.M., as the pursuit continued, the van was heading northbound on Cambridge Street where it ran a stop sign and collided with a patrol car traveling eastbound on Felton, causing the patrol car to strike a power pole on the corner before landing on its right side, while the suspect vehicle crashed into a residence. The officer driving the patrol car was not involved with the original pursuit but had responded to assist the other officers looking for the suspect.

Officer, Nick-Tomasito Birco, 39, was later pronounced dead at San Francisco General Hospital.
​
During his brief career, Officer Birco was awarded a Police Commission Commendation in December 2002 for his bravery in executing a search warrant on a man whose residence contained numerous firearms and rounds of ammunition. He had also been awarded 11 Captain Complimentary awards, and had received two letters from citizens impressed with his level of service and professionalism.

At approximately 8:30 p.m., December 22, 2006, San Francisco police officers attempted to serve a felony warrant on a man described as armed and very dangerous in the area of 25th Avenue and Lawton Street. Police spotted the suspect after recognizing him from flyers circulated at the Taraval station. When officers approached him with an arrest warrant, he ran.

Officers set up a search perimeter at 25th and 26th avenues and Moraga and Lawton streets. During the search, Officer Bryan Tuvera and his partner spotted the suspect and chased him on foot to a two-story home at 1631 25th Ave. After leading the officers up to the home, the suspect kicked down a side door to the home’s garage and ran inside. When officers followed, the suspect turned and fired, hitting Officer Tuvera. Tuvera’s partner continued the pursuit and returned fire on the suspect. The suspect ran into an adjoining area and collapsed. He was pronounced dead at the scene.
​
Officer Tuvera was transported to San Francisco General Hospital, where a team of surgeons led by Dr. Geoffrey Manley, chief of neurotrauma, tried in vain to save his life. Shortly after midnight, the announcement came that Officer Tuvera was taken off life support and died at 12:01 a.m. –Twelve years to the minute after his father, Benny Tuvera, a San Francisco police dispatcher, had passed away.

Joselito Alvarez Barber
Seattle Police Department
Washington
​Incident Details:
Officer Joselito Barber was killed when his patrol car was broadsided by the driver of a vehicle traveling at an estimated 80 mph on a city street.

His vehicle was struck at the intersection of Yesler Street and 23rd Avenue at approximately 4:00 am.

The driver of the vehicle was wanted on four warrants, including a DUI warrant, when she ran the red light and struck Officer Barber’s patrol car. She pleaded guilty to vehicular homicide in September 2007 and was sentenced to serve 20 years in November 2007.

Officer Barber had graduated from the police academy only 5 months earlier. He is survived by his fiancée, mother, father, step-mother, brother, and sister.

Officer Borja had served with the New York City Police Department for 16 years, and was assigned to the Property Clerk’s Office. He is survived by his wife and daughter and two sons.

On the morning of September 11, 2001, seventy-two officers from a total of eight local, state, and federal agencies were killed when terrorist hijackers working for the al Qaeda terrorist network, headed by Osama bin Laden, crashed two of four hijacked planes into the World Trade Center towers in New York City. After the impact of the first plane, putting the safety of others before their own, law enforcement officers along with fire and EMS personnel, rushed to the burning Twin Towers of the World Trade Center to aid the victims and lead them to safety. Due to their quick actions, it is estimated that over 25,000 people were saved.

As the evacuation continued, the first tower unexpectedly collapsed due as a result of the intense fire caused by the impact. The second tower collapsed a short time later. 71 law enforcement officers, 343 members of the New York City Fire Department and over 2,800 civilians were killed at the World Trade Center site.
​
A third hijacked plane crashed into a field in rural Pennsylvania when the passengers attempted to re-take control of the plane. One law enforcement officer, who was a passenger on the plane, was killed in that crash.

The fourth hijacked plane was crashed into the Pentagon in Arlington, Virginia, killing almost 200 military and civilian personnel. No law enforcement officers were killed at the Pentagon.

The terrorist attacks resulted in the declaration of war against the Taliban regime, the illegal rulers of Afghanistan, and the al Qaeda terrorist network which also was based in Afghanistan.

On September 9, 2005, all of the public safety officers killed on September 11, 2001, were posthumously awarded the 9/11 Heroes Medal of Valor by President George W. Bush.
​
The contamination in the air at the World Trade Center site caused many rescue personnel to become extremely ill, and eventually led to the death of several rescue workers.

On Monday, 11/19/2012, 10:00hrs,The Memorial Plaque for Officer Bryan Tuvera was unveiled. Many supporters, Friends, Family and colleagues attended to pay tribute for our fallen hero. FALEO extends their sincere thanks to all those below who extended that “extra” for this timeless project.

December 23 will mark the 6th year anniversary memorial of our fallen Officer Bryan Tuvera who gave the ultimate sacrifice in the line of duty. As you all may know, FALEO as an organization was formed to honor and pay tribute to our fallen Officers, Nick Birco and Bryan Tuvera of the San Francisco Police Department, Officer Joselito Alvarez-Barber of Seattle Police.
​
Officer Tuvera’s home station of Taraval Station banded together to have a Park (across the street – McCoppin Park) dedicated to him and amidst the obstacles they encountered, they never gave up. Another District Station took on the initiative to create a standing plaque (attached) in his honor and faced many obstacles to include costs, and approvals from City Agencies.

It is imperative that we keep the flame alive in not forgetting Officer Bryan Tuvera, and all for that matters, anyone who have given the “ultimate sacrifice” in the line of duty in any profession. The cost of this project is over $10,000 plus installation cost(s)
Please join us the next two weeks until December 8th, to send in a donation in honor of Bryan Tuvera.

No Donation ($1, $5, $10 or …… ) is considered too small for this worthwhile cause and we realize that it is difficult during these economic times.

Checks can be sent to FALEO (Filipino American Law Enforcement Officers Association), P.O. Box 77086, or sent via paypal to the following telephone number of: 415.735.7087 or email address: faleo.president@gmail.com
​
An account has also been established at the SF Police Credit Union (Tuvera Memorial Fund), Account # 1369431-S5.7

FALEO is a 501(c)3, Nonprofit, charitable organization and your donation is tax deductible to the maximum extent allowable by law.
Our Tax ID# is 39-2072004
​
Press Articles on Memorial Dedication:​
Speech by Capt. Jason Cherniss – Capt. Curtis Lum
​
A big thanks to our current donors as of 11/19/2012 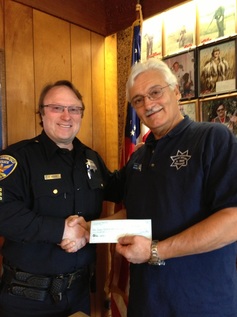 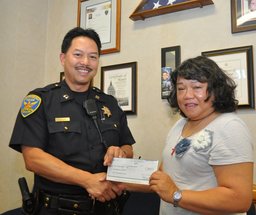 ​
In Memoriam
We remember and will not forget the tragic events of 9/11/2001. Police and Fire come together for a memorial at Civic Center Plaza in San Francisco to commemorate the 10th year anniversary of the attacks. Read more here.
Brother Roel Dilag of FALEO / SFPD
Photos: Michael Macor / The Chronicle